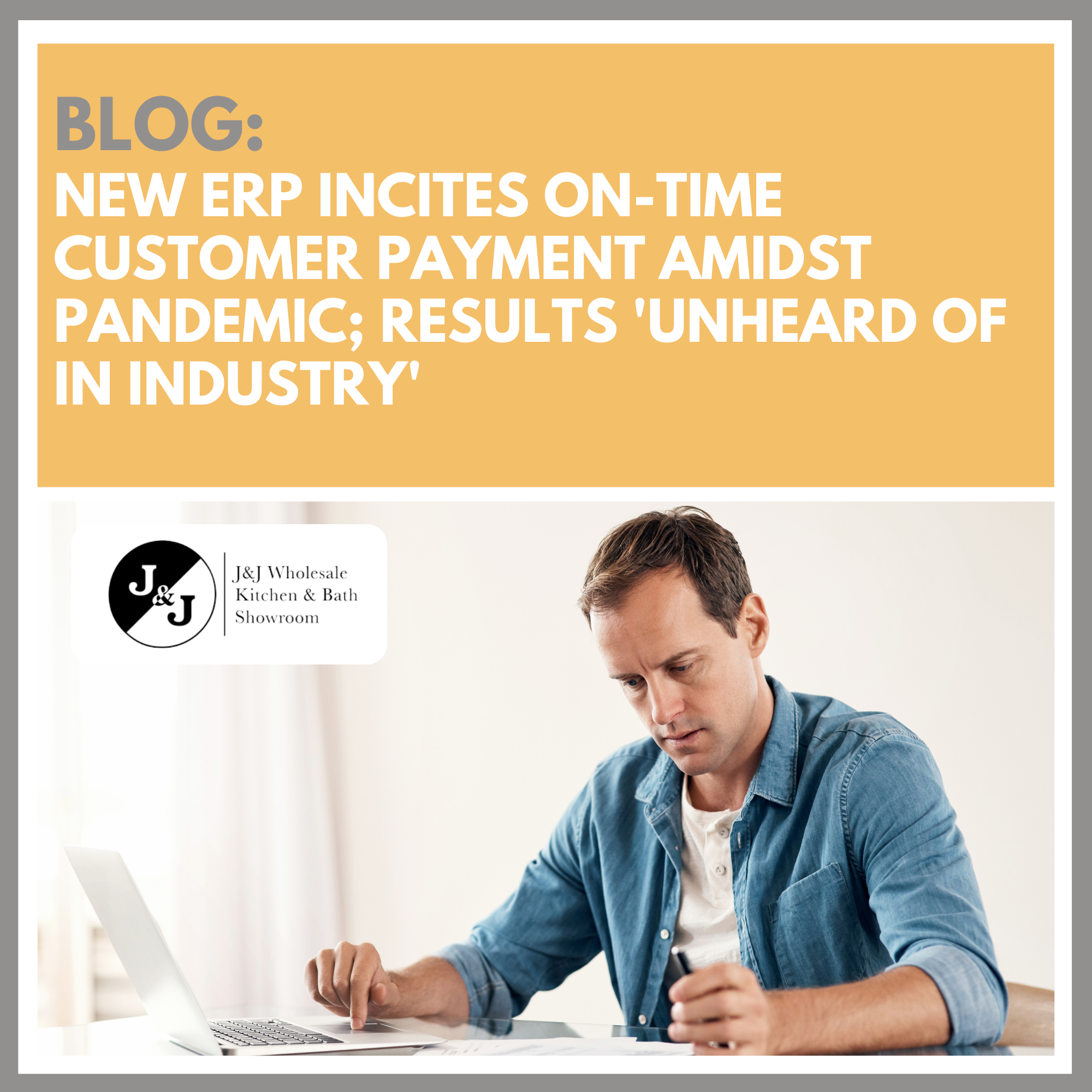 In business for more than 30 years, J&J Wholesale Kitchen & Bath Showroom has learned a thing or two about the industry and what is needed to run a successful operation. After being pitched a savvy new ERP software alongside another industry colleague, Owner Jason Carpenter found himself in a bit of a mess with missing data, processes that did not align to his operational workflow, and lackluster support.

“I should have known right off the bat things were going to go south,” Carpenter said after witnessing the less-than-stellar “go-live” week of a fellow business’s experience with the same ERP company. Still, he held out hope things would turn around. They never did. And after tolerating the heavily-touted system long enough, Carpenter decided it was time to make a change. After just 3 years of being “Live,” Carpenter listened to what he knew best: his gut instinct.

Moving on from bad decisions
It was during two annual industry showcases (IMARK and Southern Wholesalers Association) Carpenter had a chance to take an in-depth product tour of Savance Enterprise’s ERP Software and saw first hand the intuitive nature of the workflows that closely aligned to his operations management. He realized that he was so unhappy with his current ERP software he couldn’t bear to deal with the complications and impact on his business anymore. Carpenter took a chance and elected to ‘lick his wounds’ as he puts it, and move onto something that made more sense for his team.

The level of personalization Savance Enterprise was able to provide was never more apparent than when J&J began the data extraction for the transition. Carpenter encountered considerable issues with field mapping preventing him to identify critical information that needed to be present in his new system. He recounts trying to find where the information lived within the former system. In addition, the data seemed to be corrupt, preventing the PHCP distributor from understanding critical information needed to run operations with the depth he required as a business owner. After several rounds of back-and-forth of what seemed to be an impossible task, Carpenter and Savance decided the most logical solution to establish a strong foundation, would be to rebuild the system from scratch — and that’s just what they did.

Pandemic struggles bring out the best of the software
Though seemingly unconventional, J&J pushed to “go-live” amidst the height of the global COVID-19 pandemic. One immediate benefit? The Savance system created a substantial improvement in automating billing, alleviating the need for paper and added handling. “Savance’s automation has been pretty mistake-free with Savance and has helped us a lot during a time when nobody wants to touch anything of someone else’s,” says Carpenter. This feature has helped slash customer payment time by proactively encouraging bill pay earlier than J&J would have previously received. “Customers are actually paying their bills earlier than they ever have before, which is unheard of in this industry,” states Carpenter. Part of the reason for that is because Savance’s intuitive sales order entry automatically notifies the customer of the order which signals a payment is upcoming. Carpenter says this feature has been a blessing in disguise given the recent economic environment.

Carpenter adds his team is very receptive to the new Savance system and has picked up the workflows pretty quickly. While there are always technical learning curves, his speed-to-customer time has improved greatly since transitioning to Savance. He is delighted to look at the multiple terminals and see everyone serving a customer, faster than they ever have before due to the intuitive nature of sales order entry. “My team doesn’t have time to click around seven times before landing on the screen they need. With Savance, I know my customers are not waiting around an extra five or ten minutes because we’re processing an order. Savance just makes it easy to get customers served and back out on the road”.

J&J Kitchen and Bath has set themselves up for success long into the future with Savance Enterprise ERP Software. Most importantly, the Savance system has given them the ease-of-use needed to learn how to do something and not need to rely on extraneous training and additional fees. Because of that, Carpenter believes his choice to move systems, even after a huge financial loss from previous mistakes, will pay dividends in the end. “Not once have I second-guessed my decision to change over to Savance,” says Carpenter. In part, that is also due to his employee’s 90% approval rating of the new software. As Carpenter says, “sometimes you just need to realize your mistakes and move on, even if it stings at first.”